Every three years, ATGENDER organizes together with a partner institution the big European Feminist Research Conference (EFRC), which represents one of the major opportunities for feminist, queer and gender studies scholars, activists, artists and policy makers to gather and exchange experiences. The 11th EFRC in 2021 will be hosted online.

Co-organized by ATGENDER, FG Gender and the University of Göttingen, this anniversary edition of the EFRC has taken place on September 12-15. With around 800 participants, it has been the biggest European Feminist Research Conference so far. Thanks to the generous funding of the German Ministry of Education and Research, and of the Ministry of Science and Culture of Lower-Saxony, scholars, activists, policy makers and students had the opportunity to gather for free and reflect on the theme “Difference, Diversity, Diffraction: Confronting Hegemonies and Dispossessions.” Visit the conference website to find out more about the exciting programme, keynote speakers, roundtables, panels, workshops, open fora events, book launches, and much more! 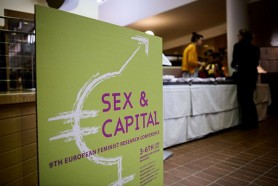 The 9th EFRC, titled “Sex & Capital,” was organized by the Unit for Gender Studies at the University of Lapland in cooperation with ATGENDER. This conference reflected the diversity of women’s and gender studies and represented cutting-edge scholarship.